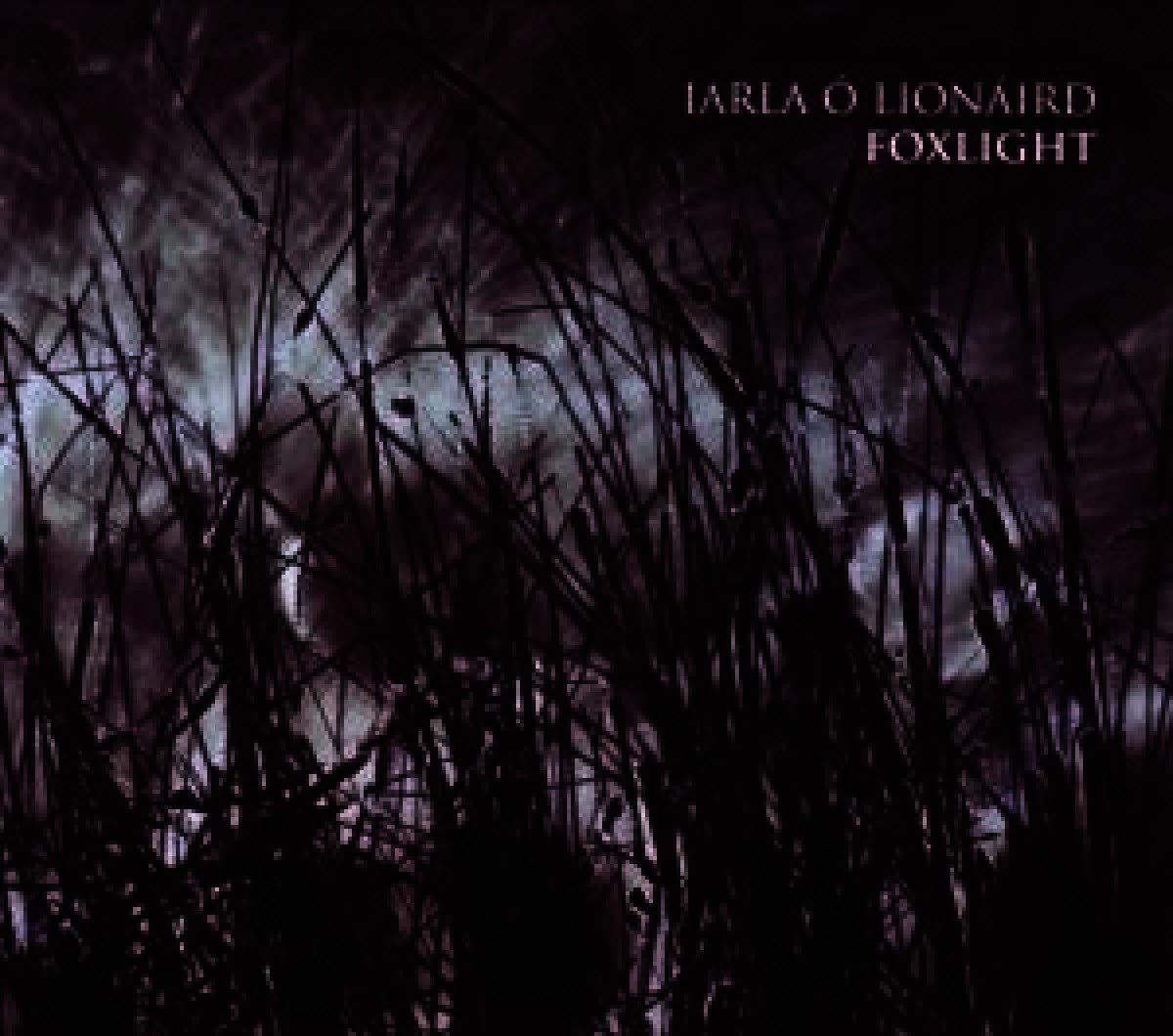 For his third solo album - Foxlight - the acclaimed Irish singer Iarla O Lionaird delivers an impassioned and sublime set of personal songs, combining the twin urges to write more new material and yet also work with an intriguing set of collaborators.

O Lionaird began writing new songs, secluding himself in his home studio on Herdman's Hill in remote Kilkenny. Joined by guitarist and producer, Leo Abrahams, the album took shape as O Lionaird and Abrahams split their time between rural Ireland and Abrahams' own studio in Bow, East London.

These disparate settings and the varying tonality of the contributing artists make this a record that shimmers with versatility. Whilst rooted in certain traditions, it is also unclassifiable and refuses to be located in one genre or another. It's one of O Lionaird's most organic, naturalistic records to date. Instrumentation and layers are embedded in each song, but ultimately it's about Iarla's exquisite, sonically unique voice.

From his early days as a sean-nos singer, to his work as lead vocalist for Afro Celt Sound System and his collaborative and solo work, O Lionaird has always ploughed his own artistic furrow. His work is very connected to the totems of traditional Irish music - sean-nos, the Irish language, traditional instrumentation - but various projects have broadened his experience and understanding in the multi-faceted nature of music. Nurtured on childhood songs, the Celtic rhythms that underpin the Afro-Celt sound and collaborations with composers Gavin Bryars and Donnacha Dennehy, there is much more to O Lionaird's exceptional gift than merely being a sean-nos singer.

People ascribe a lot of things to me musically - Cuil Aodha, Sean-nos, traditional... all of those sacred cows. They're certainly there, but I've always been a journeyman. With this record, I wanted to do things I hadn't done before and that's also because my way of listening has changed, says O Leonard.

A host of diverse musicians contribute to these songs. Composer Jon Hopkins, strings duo Geese, folktronica innovator Leafcutter John and fiddle and hardanger player Caoimhin O Raghallaigh, helped provided the eclectic, epic sweep of these compositions. Central to the album's inception was producer Leo Abrahams. O Lionaird produced the last record himself, but this time around decided that singing, writing and expressing were his priority. He says, This time, I've tried to just experience the voice, I wanted to reach new levels of expression. Abrahams is a talented guitarist who has gravitated towards the production end of music. Having worked with Brian Eno, Paul Simon and Ed Harcourt, Abrahams brought a huge amount to bear on the record, according to O Lionaird. Iarla cites an acute observation Abrahams made on 'Eleanor Plunkett', which sums up the trust that lies in their working relationship.

The ensemble of musicians involved is just as intriguing, given their varied musical backgrounds and disciplines. Abrahams plays guitar on the songs, as does Neil McColl; Leafcutter John offered multi-textured electronics, while accomplished players, Sarah and Vince of Geese provided strings. Jon Hopkins' complex piano compositions feature heavily too. On 'Daybreak', Iarla is joined by a female singer, from a vocal tradition with a similar aural history to his own sean-nos. Sara Marielle Gaup of Norwegian act Adjagas is a Sami singer, expert at yoiking.

...Ó Lionáird breaks new creative ground with Foxlight...The result is not so much a fusion or synthesis as a melting pot of sublime pure- note singing, a charming sense of almost monastic oddness, and some of the most sky-kissing melodies you'll hear all year. Best Traditional Album. --Irish Times

...one of the greatest living practitioners of the sean-nós ("old-style") tradition of Celtic singing, returns with Foxlight...with its added emphasis on original material, is a gorgeous step forward for Ó Lionáird. --allmusic.com

He's blessed with a wonderfully expressive voice, and with the ability to sing in Gaelic like few others...each of its predecessors has been a gem and his interpretations of traditional Gaelic pieces are pretty much definitive. ...perfect soundscape for O'Lionaird's peerless voice...hugely rewarding experience it is...rich, powerful and tender...providing the perfect atmosphere and the end results manage the rare trick of sounding both ancient and contemporary at the same time. 8/10 --americana.uk.com

A spin on one of Georgia’s most popular India pale ales returns this month – Creature Comforts Imperial Trop Haze.

Tropicalia, Creature Comfort’s year-round IPA has truly made a name for itself in the southeast. Building on that popularity, the Athens, (Price/1000 Pcs)1000 Pcs Hang Tag String 7" Clothing Hanging Rop

When Dogfish Head and Boston Beer merged, it was big news. After the dust settled, we were left wondering what’s next. Will it just be Sam Adams and Dogfish Head, independently but together? The sales team for Dogfish Head grew END_OF_DOCUMENT_TOKEN_TO_BE_REPLACED

While the Atlanta Braves head into fall trying to stay on top of the NL East, there’s something else going on at the Braves Stadium worth checking out.

Earlier this month PepsiCo announced they would be releasing an alcoholic version of Mountain Dew next year – Hard Mtn Dew, with the help of Boston Beer Co. Let’s just say the reactions we saw were… mixed.

If you’ve ever been END_OF_DOCUMENT_TOKEN_TO_BE_REPLACED

Champion Brewing creates a beer to pair with Duke’s Mayo

I grew up on Duke’s Mayo, which was highly unlikely considering I lived in state that was completely devoid of Duke’s. To this day I couldn’t tell you what mayo my friends ate growing up, but I’m sure it was END_OF_DOCUMENT_TOKEN_TO_BE_REPLACED

Southern Tier Distilling, the spirits arm of Southern Tier Brewing, has launched three new RTD (Ready To Drink) cocktails offerings as summer winds down. One of them is a cocktail inspired the brewery’s popular pumpkin beer Pumking, dubbed King & END_OF_DOCUMENT_TOKEN_TO_BE_REPLACED

PepsiCo and Boston Beer Co. are currently working on the new alcoholic beverage, slated to be released in multiple flavors next year.

This release is hot on the heels of END_OF_DOCUMENT_TOKEN_TO_BE_REPLACED

Bell’s Uberon, a barrel-aged Oberon is come at the end of August

From meme to beer: Scofflaw Karen From Next Door IPA

Bring a sweater. Monday Night Cardigans of the Galaxy returns

Tucker Brewing Lowlands Schwarzbier to be canned in October

Orpheus Brewing’s Stouts All the Way Down gains 16th release

One of the best returns: Highland Clawhammer Oktoberfest

A cellarman’s memory lives on. Creature Comforts Brewed For One.

Creature Comforts to distribute outside of Georgia for the 1st time

Breweries April Fool’s jokes were most about seltzers. These were some good ones.