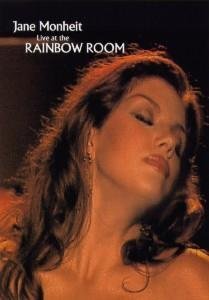 Jazz fans who treasure Diana Krall's "i"Live in Paris DVD can consider "i"Jane Monheit: Live at the Rainbow Room the second half of a luscious double bill. Like Krall, Monheit is a singer whose ease with jazz standards belies her years (a mere 24, in Monheit's case), and both women are backed by a combo and an orchestra conducted by Alan Broadbent. Monheit doesn't play the piano like Krall, but her voice is a brighter, more supple instrument. Filmed in September 2002 shortly after the release of her In the Sun album, Monheit's visit to Manhattan's legendary cabaret venue mixes classic ballads ("It Never Entered My Mind," "Some Other Time") with Brazilian pop (Ivan Lins, Antonio Carlos Jobim's "Waters of March") and contemporary tunes. It's no surprise that a young voice like this can embody the hopes and dreams of "Over the Rainbow," but who ever knew Vincent Youmans's "Tea for Two" could sound so sexy? --David Horiuchi

From the Back Cover

September 23rd, 2002... As the sun was setting on yet another New York autumn, the lights began to flicker on all across the world's most exciting city. It was a particularly beautiful and sultry evening--and, high atop Manhattan, the romance of the legendary Rainbow Room was in all its glory--a truly perfect match for the magnificent voice and presence of Jane Monheit.

"i"Jane Monheit: Live at the Rainbow Room captures music's brightest and most captivating new voice at her very best, and in a spectacular concert setting. Jane is accompanied by a 27-piece orchestra conducted by Alan Broadbent, as well as a stellar smaller ensemble of acclaimed musicians, including Ron Carter, Kenny Washington, and Rene Toledo. This extraordinary musical evening features live performances of every song from Jane's latest recording, In the Sun, as well as several personal choices from her highly acclaimed previous albums, Never Never Land and Come Dream with Me. In addition, Jane sings two unrecorded selections--including a very special duet with her former voice teacher, Peter Eldridge. Jane Monheit: Live at the Rainbow Room documents the brilliant young singer performing timeless jazz standards, along with pop and Brazilian favorites, in a truly magical setting. And on this enchanting night high above New York City, it's very clear that the sky is the limit for the stunning voice and artistry of Jane Monheit.

Songs: Over the Rainbow, Just Squeeze Me, Chega de Saudade (No More Blues), Dindi, More Than You Know, Since You've Asked, It Might as Well Be Spring, Tea for Two, Hit the Road to Dreamland, Love Has No Pride, Once I Walked in the Sun, Comecar de Novo, Please Be Kind, It Never Entered My Mind, Turn Out the Stars, Haunted Heart, Cheek to Cheek, Around Us, Waters of March, Some Other Time

Welcome back to the Australian Museum

The AM has reopened with COVID-19 protocols in place, including vaccination requirements, mandatory face masks and social distancing.

Why not join the family?

Discover even more by becoming a Member. Delve into the Australian Museum’s collections, join a vibrant community and support our groundbreaking research and cultural projects.

Read about our latest discoveries, research expeditions and collection objects on display.

200 Treasures of the Australian Museum

The Westpac Long Gallery showcases 100 treasures from our collections alongside the stories of the 100 people who’ve helped shape Australia.

Advocating for the richness of life, the earth and culture in Australia and the Pacific, the Australian Museum Shop aims to ignite wonder through thinking, learning and play.

Discover ‘Changing Climate’ – an interactive display that asks not how we will survive Australia, but how Australia will survive us!

Welcome to life on Earth. Every one of Earth’s millions of species is unique, but they are all connected through evolution. Come and see life in all its glorious diversity – over 400 animals under one roof!

From dinosaurs to rooftop dining, the transformed Australian Museum has something for everyone and General Admission is now free. Plan and book your visit to the Australian Museum, and discover the extraordinary exhibitions on display.

Discover our exciting exhibitions and program of events including Prehistoric Playground for kids and First Nations cultural programs.

Come and explore our exciting range of products inspired by the Museum's collections. All proceeds help fund our science, education and exhibitions programs.

Music at the Museum

Sydney’s best jazz and classical musicians welcome visitors back to the Australian Museum with performances in the heart of our transformed building, Hintze Hall.

How well do you know your dinosaurs? Discover the amazing creatures that ruled the world until 65 million years ago in this exhibition that brings the Mesozoic era to life.

Delve into the Australian Museum exhibitions and enrich your understanding of our collection on display through our self-guided audio tours.

Explore and celebrate Australia’s Aboriginal and Torres Strait Islander cultures through a rich diversity of objects and stories of living culture. See more than 250 fascinating objects from Indigenous communities around Australia.

Experience the diverse and dynamic cultures of the Pacific and admire the skill, creativity and spirituality of the region’s artists through this collection of colourful treasures from across the region.

Discover our research behind the scenes, read stories from our collections and learn about the latest fieldwork findings in our blog.

News highlights Listen to our Podcasts Visit the Media Centre

What do you call one of the world’s most beautiful frogs?

Are some spectacular tree frogs from China and Vietnam two, remarkably similar species, or only one? An international team of herpetologists, including the AM’s Dr Jodi Rowley, solves this mystery once and for all!

Do you see what I see?

For effective conservation and fisheries management, we need data – but with limited funding and resources, there are gaps in our monitoring programs. This is where our fabulous citizen scientists come in! Our scientists, with CSIRO and NSW DPI, studied data from the Australasian Fishes Project.

In conversation with Dr Dana M. Bergstrom, winner of the 2021 Eureka Prize for Leadership in Innovation and Science.

Scientists from the Auckland Museum & Australian Museum have identified a new genus and species of pygmy pipehorse from Aotearoa, New Zealand. The new species was named in collaboration with the Ngātiwai – this is also the first species of syngnathid reported from New Zealand since 1921!

As the world community turns to COP26 next week, discover what the Australian Museum is doing to take action on climate change and sustainability.

Each month, a selected blog from Lizard Island Reef Research Foundation is featured at the AM. For this month, we feature Changing reefs.

The Faces of Mummies

Melissa Holt, project conservator at the Australian Museum, tells us about the conservation treatment of four Ancient Egyptian Cartonnage coverings, including three masks! Read part one, in this special AM blog series.

17 individuals and teams recognised across the categories of Research & Innovation, Leadership, Science Engagement and School Science.

More from our blog

Read about our latest discoveries, research expeditions or discover our interesting archive of blog posts.

Where nature, science and culture intersect

We are Australia’s first museum, and have over 21 million scientific specimens and cultural objects in our collections. Learn more from First Nations people, discover thousands of animal factsheets and explore our online education resources.

The Australian Museum has been involved in raising awareness and researching impacts of climate change for over a decade.

What are we doing?
What is climate change?
Learn more

Learn more about this land’s First Nations peoples and cultures.

Learn about our evolving landscape, Australian megafauna and other extinct animals and how we use fossils to relate the animals of the past with those of today.

For teachers and students

Our education programs and resources spark curiosity, develop scientific understanding and enhance cultural awareness in students of all ages.

Megafauna are large animals such as elephant, mammoth, rhinocerous and Australia's own diprotodon.

Dinosaurs and their relatives

Discover the Mesozoic era of the dinosaurs! Dinosaurs are classified as a group of reptiles, although some of their features are found in mammals and birds living today.

Learn about biodiversity, the scientific study of life and organisms, and the story of human evolution.

The Mineralogy and Palaeontology collections include rocks, minerals, gemstones and fossils, and reveal how the earth was formed.

Make a donation. Become a member or volunteer. Or put your passion into practice on a citizen science project. Find out how you can get involved with the Australian Museum.

Donate to the Australian Museum Foundation

Ways to join the Foundation
Our supporters
Donate now

FrogID is a national citizen science project that is helping us learn more about what is happening to Australia’s frogs.

Leading a healthier, more sustainable lifestyle and saving money in the process is easy with these helpful factsheets.

Support our research
Help save the reef
Get involved

See our citizen science projects and discover how you can get involved and contribute!

Work at the Museum

Discover the exciting roles in research, exhibitions, education and communicating the relationship between people, culture and the natural environment.

The Australian Museum has been inspiring exploration of nature and culture for more than 190 years. Learn more about what we do, our extraordinary collections or our fascinating history.

Learn more about our organisational structure, what we do, the passionate people who work at the Australian Museum and our fascinating history.

AMRI brings together scientific expertise and world-class research infrastructure to increase our knowledge of the world around us and inform environmental decision-making for a better future.

The Lizard Island Research Station is a world-leading supplier of on-reef facilities for coral reef research and education. Located on the northern Great Barrier Reef, 270 km north of Cairns in Queensland, Australia.

Why do we collect things? Discover the history and future of our millions of collection treasures and research areas.

The Australian Museum’s statement of reflection

Cultural institutions have a responsibility to critically reflect on history and how it influences the present.

Our primary focus is on ecological applications such as species identification, individualisation, conservation and small population management.

Learn about past Australian Museum expeditions and field work from around the globe that have contributed to our collections and research.

As part of a $40M Blockbuster Funding agreement created by the NSW Government, the Australian Museum will be able to host and tour major exhibitions over the next four years including: Ramses The Great and the Gold of the Pharaohs and SHARKS.

Visit the Australian Museum in Sydney

Visit Australia’s first museum in the heart of Sydney to discover Aboriginal and Torres Strait Islander culture, our collection of Australian dinosaurs, and the deadliest of down under animals. See you at the Australian Museum.

Keep up to date on events, special offers and scientific discoveries with our What's On eNewsletter. Receive the latest news on school holiday programs and much more!

Sign up now
Back to top
You have reached the end of the page. Thank you for reading.

The Australian Museum respects and acknowledges the Gadigal people as the First Peoples and Traditional Custodians of the land and waterways on which the Museum stands.